Steve works in a small ten person company. For the last two years, he has been designing sheet metal battery housings for a bio-medical product designed and marketed by his company. Steve's company's main client would like them to explore the possibility of replacing the sheet metal housing with a plastic housing. Steve has a good idea about how the plastic housing will look. He has seen an example of a plastic housing being used in a competitive product. However, his boss wants to learn about the cost before deciding to switch to the plastic. He asks Steve to figure out the cost of making an injection molded plastic housing. Steve is really excited about this project.

Steve sets out to get an estimate for the injection molded battery housing, but encounters many obstacles. He tries multiple approaches recommended by his co-workers, but after each attempt, Steve still does not have an answer and grows more frustrated with the project.

Hearing about Steve's difficulty in acquiring an estimate, a co-worker informs Steve that he has recently heard about a website called CustomPartNet that he should investigate. Steve locates the website and finds that he can easily browse through an extensive reference part gallery for injection molded parts. He quickly identifies a housing that meets his specifications, shown below. 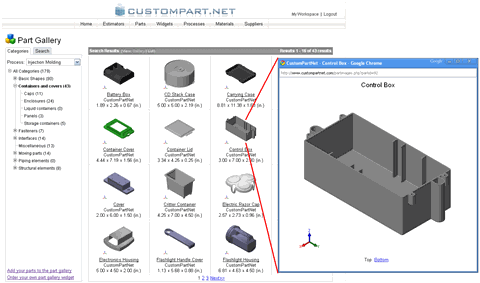 Steve is able to view the cost estimate for the housing and can even change the material and wall thickness of the reference part to exactly match his specifications. The system uses up-to-date market information to instantly produce an updated cost estimate. 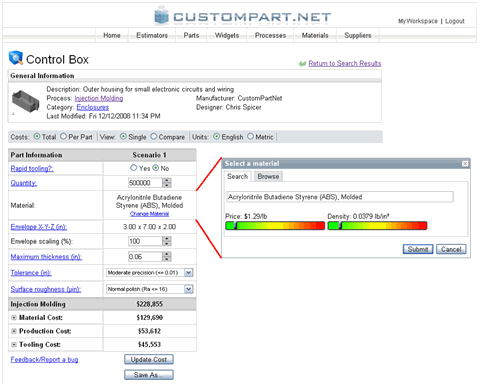 Steve also performs several what-if scenarios to see how changing the quantity, material, and part size will affect the cost. 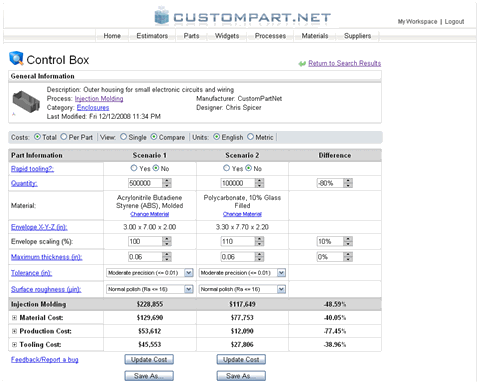 In addition, an extensive glossary helps him understand the specialized terminology used in the injection molding community. Steve is able to invite his brother-in-law Bill to add comments and help refine his analysis. He presents a very detailed cost analysis report to his boss and his boss decides that they should switch to the plastic part. The system also allows Steve to search for qualified molders, based on the part parameters, who can mold the part for Steve.