Bill is a mechanical engineering student that is currently taking the senior design course at his university. As part of this course, Bill and the other members of a 5-person design team must fully design a new product. They must specify the material, manufacturing process, and estimated cost of each component. Students in this course who produce successful designs often go on to apply for patents and sell their products.

Bill and his team have completed their preliminary designs and now must estimate the cost of each component. Bill tells his team that they can use the tools at CustomPartNet to generate estimates for each of their parts and proceeds to show them how to estimate the cost of the plastic housing for their device, shown below. 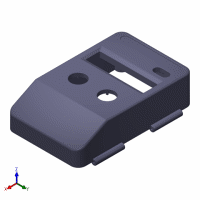 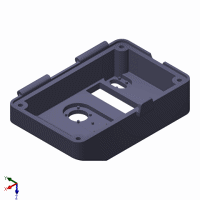 Bill and his team have learned about a variety of manufacturing processes in their design course and have decided that the housing will be injection molded. Using the online cost estimators at CustomPartNet, Bill enters the necessary parameters of the housing. For the parameters that he is unfamiliar with, the glossary pop-ups explain what information is required. After completing the estimate, Bill can instantly view the cost breakdown and save his estimate. As shown below, Bill sees an estimate of $1.231 for each part. 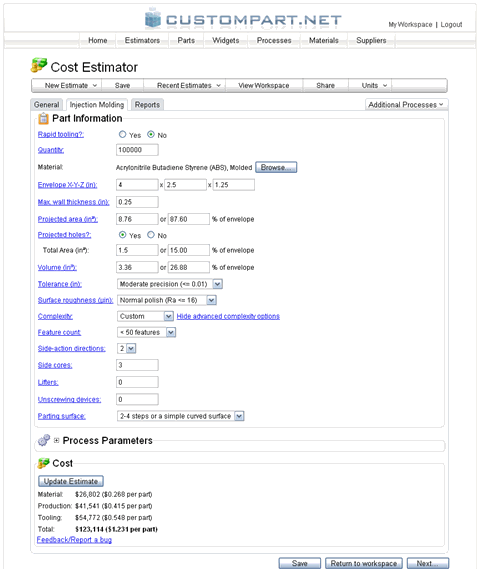 Bill and his team previously determined that for their product to be affordable, it would need to be manufactured for under $3.00 per part. After seeing that this single component contributes to over 40% of the cost, Bill needs to find a way to cut cost. Bill clicks on the link to CustomPartNet's process overviews to look for answers. He quickly finds that the information provided on injection molding explains the cost drivers for this process and the proper design rules to reduce cost and improve part quality. 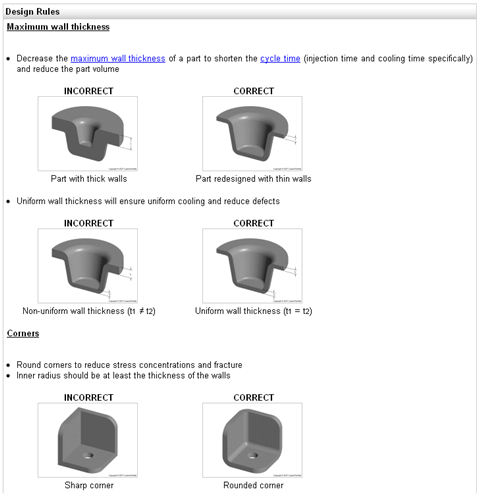 In his design course, Bill learned about a large number of manufacturing processes, but there was not enough time in a single semester to cover the correct design practices for each process. In CustomPartNet's process overviews, Bill learns that injection molded parts must have thin walls in order to cool quickly and that adding ribs to flat surfaces will add the necessary strength. Bill also learns that undercuts in the part will substantially add to the tooling cost. Using this information, Bill and his team redesign the plastic housing for their product. As shown below, the new design has thinner walls, with ribs for added strength. Also, the hinges and latch have been redesigned to remove undercuts. 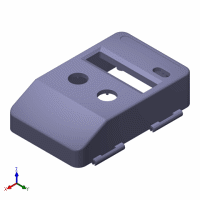 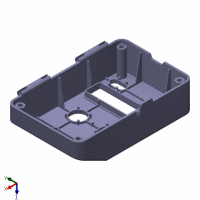 Bill now returns to his saved estimate and enters the new parameters of the redesigned housing. He and his team are amazed to see that their new design will only cost $0.641 per part, a reduction in cost of 48%.

With the design now complete, Bill decides to explore the effect of material on the cost. His team had initially chosen ABS as the material for the housing because they had learned in class that ABS is a commonly used material for small injection molded housings. However, in CustomPartNet's process overviews, Bill finds several alternative materials that are also commonly used for housings. These materials include nylon, polycarbonate, polyethylene, and polypropylene. Using CustomPartNet's cost analysis page to conduct live cost comparisons, Bill is able to immediately see the effect of each of these materials on the cost of the housing. He quickly determines that using High Density Polyethylene (HDPE) will yield a cost of $0.469 per part, a further 27% reduction in cost. Furthermore, Bill is able to view how this reduction in cost is possible. HDPE has a lower density and unit price compared to ABS, which lowers the material cost. Additionally, the thermodynamic properties of the material allow the production rate to increase from 132 to 276 parts per hour. 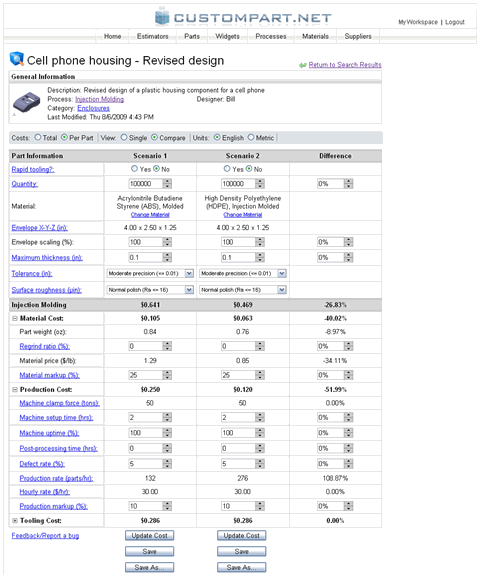 Using the tools at CustomPartNet, Bill and his team were able to quickly estimate the cost of their own parts, learn about the design rules and cost drivers for injection molding, and conduct instant cost analysis for several what-if design scenarios. As a result, Bill and his team found it easy to redesign their part to dramatically reduce cost and improve the manufacturing and quality of the product. Bill and his team continue to use CustomPartNet for design tips and cost estimates for the rest of the components. At the end of the semester, their professor is impressed with their design and recommends that the team apply for a patent and pursue developing their design into a marketable product.